Begining of the Slow Death of Mac

When Apple first came out with their computers, they began a process of advertising to anyone and everyone showing the future of home based computers. At reasonable prices at the time, no one company could compete advertising wise. I remember my first set of computers and to this day, still own these ancient relics in my storage. My very first computer was called an Aquarius computer as seen here: 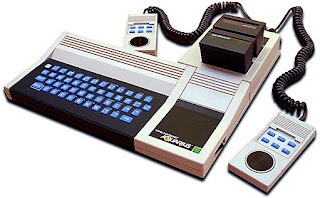 I remember sitting at my desk typing numerous lines of code to make different designs or mathematical calculations with this cheap contraption. I furthermore began to understand certain concepts of coding and programming that still exist in today's world of programming. Also some of the games that came with this particular computer at the time were classified as intense. Here I learned the concept of what Dungeons & Dragons was really all about. It was a damn shame I could not really get that Tron game to work very well. Oh and one other thing, how durable was this computer? Very! It lasted me many years.

The next computer was called a Timex Sinclair as seen to the right. This 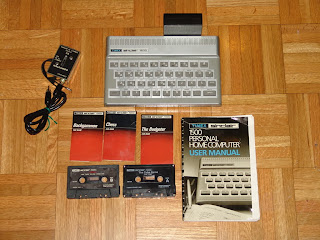 computer was not as graphic intense as the Aquarius based completely on the nature that this was more of a self teaching programming computer as opposed to a gaming system. Overall at the time, none of these computers were able to compete with Apple and their Advertising of their computers. But for families with a small budget, they were excellent choices and they assisted at least one member of the family to prepare for the future of home computing.

So after nearly 25 years of lots of Advertising dollars, I personally feel that Apple is coming to the end of its very own life-cycle. As these computers went nowhere 25 years ago, we are now starting to see a decline in Mac's own life of computers. Microsoft still has a few years left, but not without some more controversy in the mix. As we begin to see a new dawn in the computer industry with the compliments of Google and the Android technology, we are going to start seeing the decline of Apple. Google is going to become tops in the Computer-Communication arena, but Microsoft will still for the time being hold the true Computer-Business arena. Furthermore, Apple has always been superior in the Graphics Editing portion of the computer industry, but as new better and cheaper technologies are coming out, Apple will no longer be able to cover their bottom line and will have to consider folding up the company before the bottom falls out to save their own face.

{Photos courtesy of twilyth at Photobucket and http://www.pugo.org}
Posted by Warlord Computers at 11:38 AM No comments:

I have been seeing and hearing a lot of advertisements for "Remote Help" from some companies that claim to fix your computer Remotely and that there is no need to send a technician to your home or office. Well here are some dangers that you need to consider when buying into this "Remote Help" type of situation.
For the most part, yes, "Remote Help" does allow you to not "Tiddy" the place up to make an impression on the technician doing work for you. But at the same time, they do not see you, and most importantly, you do not see them. We have been chatting for years on the Internet, I myself remember when "Prodigy" came about in 1989 and had the opportunity to chat with some one in New York. It was a very unique experience to chatting remotely with someone I never saw. But who was this person? What did this person look like? And most importantly, was this person actually doing what they said they were doing?

Questions are always going to pop into your head in regards to Computer Repair, but we here at Warlord Computers like to give our customers a better sense of security when fixing computers for our customers. We like to give them a better understanding as we not only present ourselves in their presence, but also look them into the eyes to let them know we are not going to lie, cheat, or steal from them the precious data they have saved on their computer. We pride ourselves on giving the customers exactly what they need, and we pride ourselves on giving them the sense of security they need when times are not going their way.

If you have any concerns, please feel free to contact us at theski@warlordmgt.com or if you have computer repair issues that needs to be addressed, contact orders@warlordmgt.com.
Posted by Warlord Computers at 9:02 AM No comments:

We are a small business starting out in the Omaha area. We are not your average everyday run of the mill computer company. We have a knowledge base that gives you the feel of security when you need your most precious item repaired. We do not talk geek to you, we talk to you like a human being. We stay on top of the trends within the ever changing world of computer technology.

We are currently not Apple certified, nor are we going to be. We will explain our view on Apple computers later in our blog.

We specialize mostly in custom build systems at reasonable prices. We will design a computer around your needs and what you plan to do mostly with the computer. We will not overprice your system. You need simple, we will provide you with a simple computer made from top quality components. We will recommend to you what type and brands we will build your system from and also explain why.

Our focus is not only your but your piece of mind. We pride ourselves in offering the best computer services imaginable for your home, home office, or small business.

Our motto is "Computer Repair to Fit your Budget." We will advise you here of the some of the latest trends in computers, some of the common problems that may impact your computer, and give you our opinion on the what is best for you and your situation.

Please feel free to contact us at theski@warlordmgt.com with your questions or concerns.

Posted by Warlord Computers at 8:44 AM No comments: